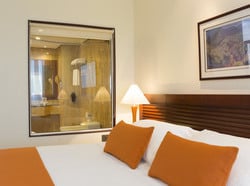 Located in the industrial heart of Guayana, and just front of the International Airport of Puerto Ordaz, the Best Western Mara Inn puts...

Guyana or the land of many waters is a republic located to the north of the South American continent on the borders of the Atlantic Ocean. Of indigenous origin, Guayana is known for maintaining its original traditions in spite of many years of British control. Calm reigned after independence as memories of the violent actions that took place began to fade, and nowadays, excepting some disputes with Venezuela about annexed lands, it is a tropical enclave of peace in the immense Caribbean.
The country is divided into ten regions: the capital has the same name as the country, Guayana. The city has a tropical and humid climate that generates good agricultural development, one of the countrys main sources of revenue. Lumber and mining are other economic resources; therefore, the country depends largely on its primary sector and to a lesser extent on the secondary sector, experiencing a small increase in services in recent years.
Due to the great cultural variety of the city and the countryits indigenous origin, its proximity to Suriname and French Guinea, its history of British colonization, and the immigration of a Hindu populationGuayanas ethnic wealth is enviable; the coexistence of diverse styles make its principal city even more valuable.
Tourism in both the city and the country is based on the natural beauty and fascinating wildlife, as well as the rich culture yielded by years of immigration. A sunset in this city is remembered with affable melancholy; for the difficulty one has in reaching this magical land is rewarded by the lack of other tourists. It is therefore one of the best alternatives for those who would wish to travel to the Caribbean or to a tropical climate, yet avoid the avalanche of tourists.

In Ciudad Guayana we will have broken clouds, the day will be very hot; beware of heat stroke.

Points of Interest in Ciudad Guayana